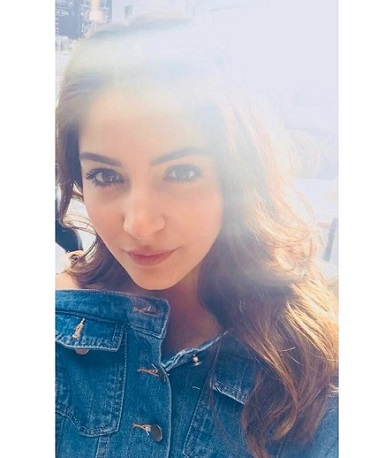 Bollywood Beauty Anushka Sharma, is one of the most happening heroines in the country. Currently married to India’s cricket captain Virat Kohli, Anushka is the most trailed actress who has a huge following for her movies.

Anushka is currently acting under Anand L Rai for her upcoming movie ‘ZERO’. Zero stars Bollywood Badshah Shah Rukh Khan as the hero. On the other hand, Anushka is all set to release her movie titled “PARI”, for which she has produced. Also, a movie titled ‘Sui Dhaga’ featuring Varun Dhawan and Anushka is in making.

This busy lady took her Instagram to post one of the cutest pictures today. With the sunkissed elegant face, Anushka is seen wearing a denim shirt posing like a doll. The fans are just going aww over her cute poses.