By : legandarywood
Comment: 0
Tag: Brahmi is Back, MLA movie images 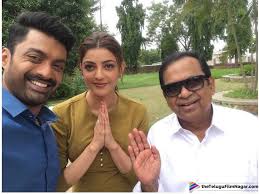 Kalyan Ram’s latest film MLA shoot is going on with a brisk pace now.  Disappointed with the result of his previous films, Kalyan Ram is seriously trying to score a hit at the box office this time.  Even Nandamuri fans have good expectations on the film this time.  The film unit is confident that the political backdrop movie will surely become a hit.

The film unit has recently released a still and Brahmanandam | Kalyan Ram | Kajal Aggarwal were present in the pic.  ‘MLA’ team is presently picturizing the same scene and they are saying that the entire unit thoroughly enjoyed the scene while filming it. other side, director Upendra reportedly penned powerful political dialogues for the film.

Naidu developed Hyderabad city as a major IT