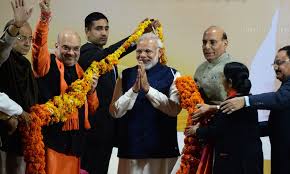 Even after being in power for 22 years, the Bharatiya Janata Party made sure that they will sweep victory yet again in Gujarat. But the surprising point is that the party hasn’t achieved the psychologically strong three-digit figure in the state, thanks to Rahul Gandhi’s timely campaign.

Though PM Narendra Modi anticipated nearly 150 seats in Gujarat, finally they have settled down for 99 seats, though they will form a government with a majority. And as the numbers were declared other day, people started applying that GST joke to them.

As per a joke doing rounds on the web