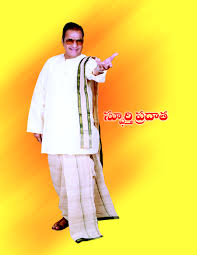 Legendary actor & late CM Dr Nandamuri Taraka Ramarao is pride of Telugu people. The late actor’s biopic started & His son Balakrishna is playing NTR in the movie. But there are many doubts among people about the biopic. Where would the film begin and where it would end and so. Because of NTR’s political background there is more curiosity whether the biopic will show difficulties NTR faced as well.

Here is the latest update regarding that. The film begins with NTR’s youth-hood and his saga and achieving pinnacle in the film industry as also founding of the TDP and becoming Chief Minister of the state.

Floating the political party will be the interval bang and the second half will be his saga as CM and as opposition leader.