Director Krish is currently busy with the shooting of the film Manikarnika starring Kangana Ranaut in the lead role. 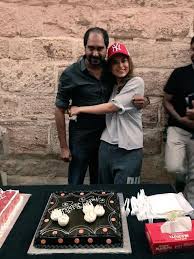 The film’s shooting is currently happening at Jodhpur. The makers are planning to finish the film by January. Later they wanted to cultivate time for the post production activities and finish the film and release it by the end of April.

Krish who is directing the film is celebrating his birthday today and Kangana Ranaut has given him a super surprising gift by giving a break to the film’s shoot and celebrating the birthday in a grand manner.

Kangana has ordered a big cake and celebrated Krish’s birthday on the film sets.  Krish was surprised to receive this gift  from Kangana and thanked her for the special gesture.

Demonetization Anthem: Who did Simbhu Target