Siddhu got several offers in Malayalam in the past but he has never done a Malayalam film now. But he is saying that this character excited him. 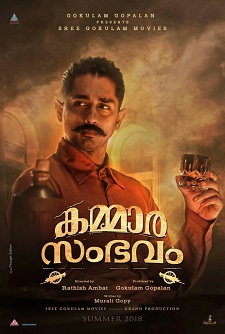 Sidhu in a different look

Siddhartha, achieved lover boy image in Tollywood in the initial days of his career.  Even though he is a Tamilian, he became a bankable hero in Telugu then.  But he slowly faded out from Telugu with continuous flops. He stopped doing Telugu films at some point and he shifted his base to Kollywood.

He has been doing Tamil films in the past few years. He made his re-entry to Telugu with horror film ‘Gruham’ recently.  It has impressed the Telugu audience and his lover boy tag got replaced with horror boy.

He is debuting into Malayalam with ‘Kumara Sambhavam’ starring Controversial hero Dileep.  Sidhu is playing a key role in the film.  The makers have revealed Sidhu’s look from the film now.. Sidhu appeared in a different look with a twirled mustache.