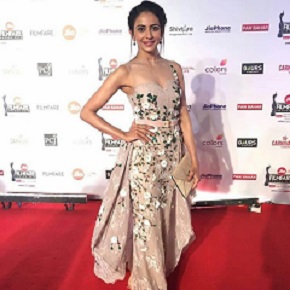 Actress Rakul Preet, is certainly a top heroine in the Telugu film industry. The actress has worked with almost all the star heroes in the industry but there is not even a single film where the actress took the dominating position to lead the film to the success path. The actress is hoping that she would get such roles in Bollywood film industry and has been planning to focus more on Hindi industry. This is the reason for the sudden physical transformation from her. Those who have seen her recently have started wondering about the reason behind the sudden change in her.

Rakul Preet, who usually is thin maintains the same physique properly. She does the gym every day to maintain a perfect shape by not putting on weight or losing the weight. But, the latest is that she has lost weight and it resulted in the change in the glow on her face. A lot of people have expressed an opinion that the charm in her face goes missing. There was never a criticism on Rakul’s physical appearance but it looks like she had some Gyan from few Bollywood sources.