Relationship behind the screen @ Jai Simha

Relationship behind the screen @ Jai Simha : 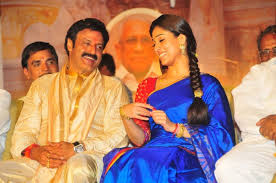 Relationship behind the screen

TDP leader Varla Ramaiah some controversial comments against Nandamuri Balakrishna and Nayantara. Going by the reports, Balakrishna’s Jai Simha audio launch was held at Siddhartha Grounds in Vijayawada on Sunday, December 23. All the TDP ministers and MLAs were deployed to support Balayya Babu’s film at the venue.

While addressing to the gathering, Varla Ramaiah delivered sensational comments on Balayya and Nayantara. “I’m not talking about your Nayana Tara & your relationship behind the screen. However, having seen Nayana Tara & your chemistry on screen, every youth feels he would get a wife like Nayantara”, says Varla. However, Nayana didn’t attend the function.

Varla further disclosed the fact that FDC chairman Ambika Krishna moves around glamourous heroines in the industry. All the cine lovers were dumbfounded with the speech of Varla. As a result, Varla made it a day for him.