Review : Tholi Prema Is Nothing New 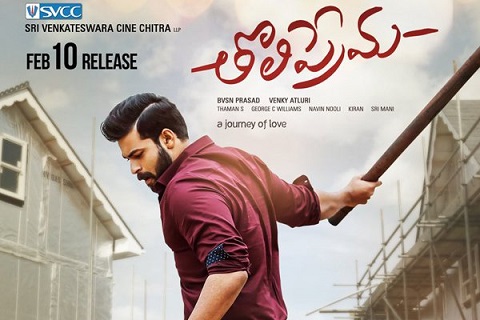 Tholi Prema Is Nothing New

Tholi prema is a cute little love story of an impulsive boy Aditya and a calculated girl Varsha. This Love, Break-up and Love themed story is a reflection of current generation youth. Adi falls in love with Varsha in a train journey, she too reciprocates. Later, in 2011, they both join in same college in Hyderabad to pursue engineering. After being super friendly, due to unintended and unanticipated incident they breakup…

Tholi Prema film takes off not so impressively. After 10 minutes into the movie, one gets a feeling that we’re about to watch another routine film. But as lead pair Adi – Varsha start their friendship, the chemistry between them engages the audience. Varsha is a true replica of current generation girls, her characterization is adorable. Aditya, the high tempered young lad is very straight forward in his approach. After some routine college rag scenes, the best part of the film comes in. The Rakhee scene stands out, followed by romance in the car scene and two good songs interlaced. All in all first half scores good.

As second half starts, six years later in time, movie is set in London. Both settled in their professions, Adi – Varsha sees each other for first time in six years, …

The chemistry between the lead pair and songs, along with a fab production values makes Tholi Prema a decent one time watch. Predictable story and the title weigh the film down overall.