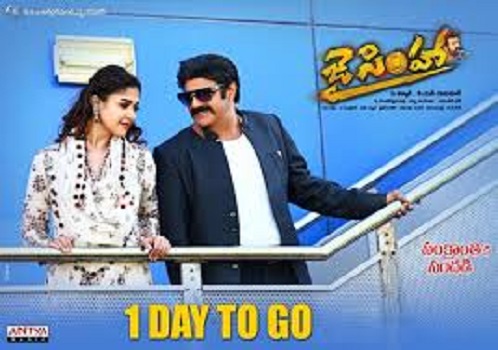 One more film which has released during this lucrative Sankranti season is Balakrishna’s Jai Simha. Directed by K S Ravi Kumar, this film has Nayantara as the female lead.

Narasimha (Jai Simha) is a man on the run with his one-year-old son. He reaches Kumbakonam and stays at the house of the village temple’s dharma Karta’s house. But while there, he bumps into Gowri (Nayantara) who seems to dislike him for some reason, despite being his childhood friend. A death row inmate Rami Reddy (Ashutosh Rana) also seems to hold a grudge against Narasimha. Who is Narasimha and what did he do to make so many enemies? What is his backstory with Gauri? Why did he come to Kumbakonam? To know the answers, you need to watch the film on the big screen.

Natasimham is the biggest advantage of this film. He is acted in two different roles & has given an All-Time performance. Balayya will not only impress the masses with his dialogues but will also move the audience with his performance during the climax. He has danced supremely well in the Ammakuty song which will be a treat for his fans.

Nayantara gets a good role once again & gives a lot of depth to the film with her sincere acting. The way her role has been designed with a lot of emotional touch is pretty good. Prakash Raj was okay in his supporting role.

Some heroic scenes in the first half, like the temple scene and confrontation scenes with the villain, have been dealt well. The interval bang is also decent and sets the tone nicely for the second part. The climax of the film is quite good and has been handled on a very emotional note.

One of the biggest drawbacks of the film is its roller coaster effect. After a very good fight or emotional scene, director Ravi Kumar adds some silly comedy and routine commercial elements. Comedy generated through Brahmanandam in the first half is quite bland and bores the audience to an extent.

The run-time of the film is a bit high as some fights and villain oriented scenes could have been easily edited out. The first half an hour during the second half featuring Hari Priya’s episode is quite boring and sidetracks the film.

Production values of the film are awesome. Music by Chiranthan Bhatt is decent as all the songs sound good on screen. But the background score could have been a bit better during the crunch elevation scenes. The camerawork is okay and showcases the Kumbakonam region well. Dialogues written for Balayya are quite mass and will appeal to the front benchers. Editing is average as the film needs serious cuts to make things better.

Coming to the director Ravi Kumar, he has done just an okay job with the film. Even though he has presented Balakrishna quite well, his narration is quite dull in major places. The way he adds unnecessary commercial elements and sidetracks the film frequently deviates the attention of the audience most of the time.

overall, Jai Simha is a typical mass masala entertainer in true Balakrishna style. The added advantage of the film is the emotional angle during the climax. The film is clearly aimed at the masses and will do well with all Balakrishna fans. But the roller coaster effect of the film can get to the regular audience at times. If you are the one who does not mind the regular commercial narration, this film ends up as a onetime watch this festival season.