speaks only Telugu for 3 minutes @ Lion : 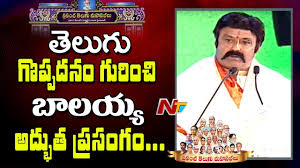 At the Prapancha Telugu Mahasabhalu, Nandamuri Balakrishna declared Telugu remained united despite bifurcation and it should remain like that forever.

Balakrishna: ‘I offer my wholehearted greetings to Telanganites. Telangana People knew how to appreciate and revolt. People of this soil proved their caliber with Telangana Sayudha Poratam‘.

On this occasion, Balayya told the inception of Telugu happened five thousand years ago. ‘A Great Man once said…Mother Tongue is like Mother’s Milk & Other Languages are like Packaged Milk. Due to the craze for other Languages, we can’t call our Mother as ‘Amma‘. Even Parents are making their children call them Mummy & Daddy. After 20 years, maybe we will be in a sad state of assuming they are Telugu Words,’ he said.

The Hindupur MLA threw a challenge while addressing the gathering from the dais. ‘Is there anyone who could speak only Telugu for 3 minutes? We could find Godavari Vompulu, Telangana Magaanam, Rayalaseema Pourusham & Kona Seema Kobbari Neela Lethadanam in Telugu. We need to respect Telugu Language fight to command respect for ourselves,’ Balakrishna.