By : legandarywood
Comment: 0
Tag: warning Bells for around 100 MPs 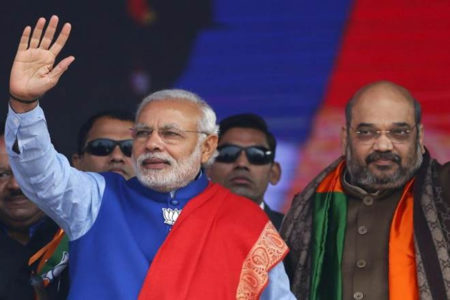 AP CM Chandrababu Naidu has already informed party-men that tickets will be offered in 2019 General Elections only based on their work and winning chances. He has been using the Survey Reports to know who is delivering and who isn’t. ‘Better Correct Mistakes Before It’s Too Late’ – That’s the message TDP Leaders received from Party.

Even BJP President Amit Shah has sent similar indications to the Sitting MPs. Party Leadership prepared a report card based on which a stern warning was issued to the under-performing Parliamentarians.

If the News is true, Amit Shah has categorically informed around 100 MPs that they would be denied ticket in 2019 Lok Sabha Polls. BJP have 276 Lok Sabha MPs. More than 1/3rd of them might not receive tickets during next polls.

As per schedule, Lok Sabha Polls should happen in April & May next year. Whereas, Modi is keen on early polls and elections might happen post October.